There were a few instances this week that reminded me of :

(a) how profound social media can be—a particular depth of awareness and appreciation exists, which we easily take for granted as we are swept away by the immediacy of what fascinates and confounds us in the ‘here and now’, as well as

(b) the prevailing yet invisible evidence that reasoning guided by intuition and instinct remains largely untapped and suitably (if not beautifully) unquantifiable.

Let me parse through the density of these thoughts in more digestible terms:

1 – Collaboration looks easy but really only works with earned trust 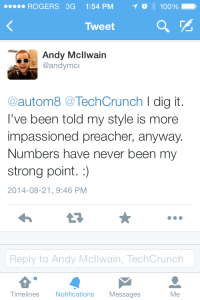 At the risk of sounding like a broken record, I will continue to maintain that Twitter is the iconic face of social media. It is, indeed, what I consider the universal core from which all other social networks triangulate and map their respective bearings within the unfathomable grid of cyberspace.

As such, Twitter is where I’ve truly established my public voice and presence – professional or otherwise. Where I’ve organically built my tribe, nurtured online/offline relationships, and depended upon them for support and affirmation.

Clear proof of this is how @andymci and I quickly agreed to revive a startup themed Twitter chat (#canstartchat) and pick up where we’ve left it last spring.

How we reacted ‘in-a-flash’, without hesitation typifies what most call ‘earned trust’. If any of us ever fail to value this non-metric based element, then we’re fretty much pucked.

First, kudos to TechCrunch for tweeting about emotion-driven marketing and to TheNextWeb for the pyschology of social media tweet.

Admittedly, most of us marketers (well, the cool ones anyway) are properly conditioned to develop a flare for snark. However, my poor attempt at joking about the redundancy of  having “psychology and social media” in one breath is ironically what inspired me to hammer out this post.

What’s even more painfully ironic, is how the above (bolded!) statement makes me sound like Captain Obvious. But you know, there may well be other factors at play as social media evolves,  not least of which is the technology that drives it to transform.

Most revealing for me has been how tech itself is getting closer and closer to mapping out parameters that characterize the human psyche. With promising advancements in automated systems, robotics and AI, we have never been more thrilled nor vigilant about the possibilities.

So lets hope. That the human psyche will continue to underpin its evolution. Not Goo–I mean, Skynet.

3 –  Philosophical consistency is the hallmark of expertise

I often reflect upon one of my tweet replies to @jetude after I once quickly pinged back that “I am a die-hard existentialist at heart.” I questioned this for a nano, only because I doubted how true that statement really was.

Or perhaps I wanted to see if I remained true to this conviction. To be honest, the existential philosophers have strongly influenced my perspective.

But whatever your philosophical leaning may be: rationalist, post-modernist or say-it-in-plain-English-ist, remaining consistent with your personal reference point (your philosophical predisposition) strengthens the logic of your own convictions. 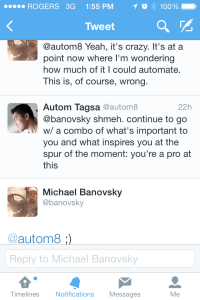 When @banovsky had a brief lapse about ‘keeping up pace”, I was glad to remind him of his own philosophical consistency. And to avoid second-guessing himself:

My peers (folks of my generation in the cusp of Boomer and GenX) may agree with me when I say that we have had the privilege of the best years of education (at least here in Canada).

I don’t say this to brag. I say it with big sigh of relief, as I hear horror stories of how challenging learning can be for the young minds of this generation.

In retrospect, my high school years have been the most impressionable and formative. Of course, post secondary schooling and eventually being in the workforce played important roles. But I would not have been as confident had I not undergone the level and quality of training I did in high school.

The same phenomenon applies to how well you bet on social media’s power. Yes, we are betting on it. We are counting on social media to open many doors. Not just for selling, marketing or selfie-ing. But for actualizing democratized and uncensored access to aspects of our life, which we used to never be able to see or hear about. In an instant. In a tweet.