As you are aware, VR (virtual reality) and AR (augmented reality) have become household names, readily adopted by many from all walks of life as each respectively undergo rapid advancements that many recognize as being transformative.

More and more, we see vast applications of these two technologies in diverse areas such as gaming/entertainment, retail, health care, education, cartography, navigation and other pursuits in both science and business.

« VR can take you anywhere. AR can bring anything to you » — Clay Bavor, VP of Virtual and Augmented Reality, Google

For those unfamiliar with these two technologies, a recent tech post via @ITProPortal provides a clear 411 and useful comparison.

I recall a few years back when AR was still nascent and its use case was pretty much limited to  being an overlay map for navigation. While seemingly specific in its functionalities, it was certainly very useful, especially if you were new to a given location/geography and you needed help finding out where things are at.

Now we see AR embedded in gaming apps like the popular Pokemon Go! or in retail apps like Ikea Place which helps you visualize how furniture would look like or fit in your space.

While there are dozens of VR-themed films from The Matrix to Tron: Legacy that immediately conjure up the limitless possibilities of virtual existence, the idea of physically experiencing virtual worlds seemed, at one point, to be but a sci-fi fantasy until of course VR headsets started popping out of the blue.

Today we see multiple, pragmatic use cases for VR from training and education programs to providing an alternate option to mitigating/addressing the correlation between chronic pain and opioid addiction.

But there is one thing clear between AR and VR that often brings speculators to wonder whether or not there will eventually be a synthesis of the two. Google’s VP of Virtual and Augmented Reality surfaces the point quite nicely, “VR can take you anywhere. AR can bring anything to you.”

With this in mind, I invite you to don your tech thinking caps and join us in discussing the current state of VR and AR. Here are some food for thought:

Q1 Thinking of truly revolutionary approaches to any endeavour or challenge, what do you consider to be VR`s most important contribution?

Q2 What are the risks and challenges associated with VR tech?

Q3 What is your preferred use case for AR (gaming, retail, other) and why?

Q4 Are there any security implications with prolonged, sustained use of VR- or AR-based apps?

Q5 If VR and AR were to converge as one form of technology, how would you conceptualize it?

You know you need to pay attention to a trend when you start seeing headlines of scammers cashing in on the action.

The excerpt below—sourced from a Medium post—offers an easy-to-understand backgrounder on blockchain:

« After the financial crisis of 2008, an unknown person by the moniker Satoshi Nakamoto designed Bitcoin and its original reference implementation. Along with it, they devised the first blockchain database. The Bitcoin cryptocurrency and the underlying blockchain technology allows users to establish trust and transact without the need for a third party through a peer-to-peer protocol.

To put it simply, the blockchain connects millions of computers and servers are across the globe in order to create a global ledger (a massive, connected and decentralized Excel file). This ledger records each time a transaction takes place and digitally posts it across millions of computers using a high level of cryptography.

Once a transaction is posted, it is grouped into a block with other transactions which have occurred in the last 10 minutes and is then sent out to the entire network. Members of the network with high computing power, called Miners, compete to validate the blocks and are rewarded using digital currency (this is how the supply of digital currency changes on the blockchain).

The block is then time stamped and added to a chain in chronological order, creating a chain of blocks that show every transaction ever recorded on that blockchain. All these computers now have a copy of every transaction. If a single computer changes this information, the network will know that this change is inaccurate. »

Thank you Kevin Neilsen Garcia for the concise 411! (Suggest reading the full article for more helpful info). Understanding the basic mechanisms behind blockchain is key to a productive discourse on the topic #obvi

Now that that’s outta the way, let me draw your attention to a recent post from Forbes proposing some implications on how blockchain’s evolution is surfacing benefits for business.

In fact, the post lends itself nicely for us to frame questions around what’s being proposed:

Spice up Valentine’s day with a deep, mental massage! Hope you can join me as I moderate #smchat on Twitter – SAVE THE DATE: Wednesday, Feb 14, 2018 at 1pm EST. 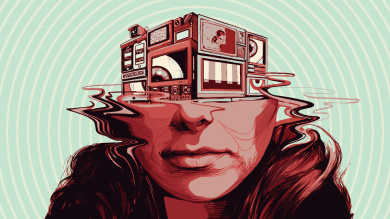 Whether or not we can call the current state of online fake news an impasse remains to be seen.

Although recent events—from allegations of Russian-linked Facebook accounts spending inordinate amounts of money to spread fake stories during the 2016 U.S. presidential election to the more recent senseless mass shootings in Las Vegas—continue to expose the pervasive effect of how fabricated information’s ubiquity can weigh over our collective psyche.

It’s a topic all too familiar, yet so difficult to wrap our heads around. And while it seems like a novel trend heavily discussed and theorized by many, as if seeking to squeeze any trace of accountability identifiable to whatever source(s) must assume responsibility, most of us know fake news is not all that new.

A recent post highlighting polling data suggests that experts are divided on how technology can effectively address the #fakenews problem. One set of respondents offers optimistic perspectives while another is leery of how we readily we tend to relegate  responsibility and control to powerful, private tech companies.

Sally Wentworth, vice president of global policy development at the Internet Society, notes that “..we are outsourcing this function to private entities that exist, ultimately, to make a profit and not necessarily for a social good. How much power are we turning over to them to govern our social discourse? Do we know where that might eventually lead?”

This philosophical rhetoric echoes similar sentiments we fleshed out in our #Trends chat in June surrounding the mesmerizing tech monopoly. For November’s segment, let’s continue our exploration in this area and don our critical thinkings hats for the hour-long convo:

A recent post from The Verge, managed to surface one jaw-dropping perspective:

By positioning themselves as the platforms on top of which information technology across every sector now runs, these titans of tech become the new centers of gravity for our economy, growing in size, scope, and influence while everyone else struggles not to fall too far behind.

These tech titans include the likes of Amazon, Apple, Alphabet, Facebook. The article highlights some compelling stats with respect to the unprecedented growth of these seemingly indomitable giants.

Does this blatant top dog landscape sit well with you?

For our June 2017 segment of #smchat Trends, let’s take a few moments to satisfy our curiosity by exploring this phenomenon and its implications: